Contrary to popular belief, olive oil is one of the best oils for frying.  The medium-high smoke point of olive oil exceeds the temperatures needed for frying. Furthermore, olive oil contains oleic acid and minor compounds that protect the oil from breaking down, even after reuse. 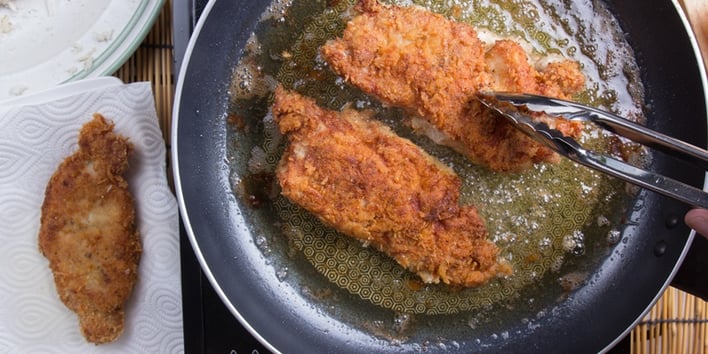 Frying is one of the most common and most delicious ways to prepare food. Throughout the Mediterranean, traditional foods like pescadillo, calamari, keftedes, patatas a la pobre, carciofi alla giudea, and falafel are all fried in olive oil.  Mediterraneans know that olive oil is the best oil for cooking and frying. So why do Americans believe that olive oil should only be used raw?

Olive oil is one of the most stable oils for cooking. Unlike other common cooking oils, olive oil contains compounds and antioxidants that prevent the oil from breaking down under moderate heat.  Additionally, olive oil is mostly composed of oleic acid (Omega-9), a monounsaturated fatty acid that is naturally resistant to oxidation.

More peer review studies can be found here and here.

The International Olive Council (IOC), the authority on olive oil, recommends the following temperatures for frying in olive oil.

Read more on the topic of measuring smoke points here and here.

Tips for frying with olive oil