This year, Greek extra virgin olive oils (EVOOs) captured 31 Gold Awards and 23 Silvers in a tough competition among an astonishing 1,000 entries from 27 countries at the NYIOOC World Olive Oil Competition (NYIOOC). Several of the top Greek winners discussed what their awards meant to them and how they managed to produce such excellent EVOOs, showcasing the merits of a number of different Greek cultivars.

It was my first year using a modern cold press facility. And the stellar results show it. It’s a different EVOO – there’s no going back now.– Konstantin N. Kokkolis, Antheion

The leading Greek winner at the 2018 NYIOOC was Papadopoulos Olive Oil Mill, which took home four Gold Awards and one Silver. Konstantinos Papadopoulos told Olive Oil Times that he and his team “feel proud and happy about achieving our goals.” He explained this year’s phenomenal success as the result of lessons learned during the previous “really difficult year,” when bad weather reduced “the quality and the quantity in Greece.” Their response: persistence and careful attention to detail, “focusing on the best methods of cultivation and production in our olive oil mill, resulting in one of the highest quality extra virgin olive oils worldwide.”
SEE MORE: The Best Olive Oils from GreecePapadopoulos Olive Oil Mill won Golds for Mythocia Chef’s Exclusive and Mythocia Olympia PGI and a Silver for Mythocia Olympia PGI Organic — all medium intensity Koroneiki EVOOs — plus two more Golds for Omphacium (robust intensity) and Omphacium Organic (medium intensity) from the less common Olympia variety (also known as Nemoutiana, but renamed for their unique location near ancient Olympia).

Papadopoulos was pleased that his company had succeeded in “bringing to light the quality characteristics of our region, ancient Olympia. It is something that we have been trying to do for many years.” They entered more EVOOs in the NYIOOC than in any other competition this year, seeking “recognition of our products with the guarantee of this most recognized competition.”

The team at Oliorama also pays “careful attention to all stages of production, with no compromise on quality,” demonstrating “dedication and persistence to reach our ultimate goal to be amongst the best in the world,” according to Maria Spiliakopoulou. The result: two Gold Awards at the NYIOOC, one for Oliorama Exclusive PGI Olympia, a medium intensity Koroneiki, and another for the organic version, Oliorama Exclusive Bio PGI Olympia.

Another olive oil producer from the region of ancient Olympia, George Goutis, pointed out that “when you try hard, you look for recognition among the best.” He got it with a Gold Award for Goutis Estate Bitter Gray, a medium intensity Nemoutiana, and a Silver for Goutis Estate Fresh, a medium intensity Koroneiki. Goutis described a bet he made with a friend who worked as a pharmacist in Germany and “decided to return to his motherland, Greece and try making a good wine.” His friend managed “to produce one of the best wines in Greece.” Goutis bet that he could “produce one of the best EVOOs in Greece and — why not — around the world. I think that we both won the bet.”

Dimitris Tsarpalis’s parents lacked such aspirations, simply producing the family’s olive oil in the traditional way. It was up to their son to learn the modern methods that yield higher quality, and then convince the most open-minded farmers of Sparta to try new things. “There’s a never-ending story, each time, to convince them to do it this way: don’t use sacks, use baskets; don’t leave it until tomorrow, no matter how tired you are; go to the mill the same day.” And harvest at the beginning of October, as soon as the nearby mill opens, to maximize the healthy phenolic content. Finally, the farmers agreed, with impressive results: most recently, Gold Awards at NYIOOC for Sparta Groves EVOO, a medium intensity Athinolia, and Sparta Groves Organic, a delicate Athinolia.

“This was the result of countless hours of planning and hard work. Needless to say, I am both excited and honored,” said Konstantin N. Kokkolis on his website. The producer from Kefalonia who won a Gold Award for his Antheion brand added, “To be honest, it was my first year using a modern cold press facility. And the stellar results show it. It’s a different EVOO — there’s no going back now. The olive in Kefalonia has a lot of potential, and I believe this potential is being reached and can get even better.”

Considering herself an olive farmer more than an exporter, Evi Psounou Prodromou of Yanni’s Olive Grove has also learned all about modern methods. She believes “the best EVOO comes from producers who love their work, follow the International Olive Council’s rules, and try to be honest.”

Winning a Gold Award for Yanni’s Finest, a medium intensity Wild Chalkidiki EVOO, and a Silver for Yanni’s Family, a medium Galani of Chalkidiki, at the world’s biggest olive oil competition, Prodroumou said they felt like they were at “the top of the world, and my husband Yannis said with a huge smile, ‘I am the king of the world,’ like DiCaprio in the Titanic.”

With a Gold Award for his Pamako Monovarietal Mountain Bio, a medium intensity Tsounati (Athinolia), Eftychios Androulakis is also proud to see his Cretan Tsounati among the best olive oils of the world. This used to be “a variety that everybody thought can’t even produce extra virgin,” he told us, especially in “one of the worst years in Cretan olive oil,” due to weather and insect problems. “We overcame this.”

For four years, Androulakis has been climbing his huge, remote mountain trees to harvest their olives, then conducting experiments with refrigeration of olives before milling, removal of their pits, use of argon gas, and much more.

Winning NYIOOC Gold Awards three years in a row, this time for the medium intensity Kolovi ACAIA Organic, Ellie Tragakes said her team at Hellenic Agricultural Enterprises is pleased to have helped “provide the Kolovi olive variety native to Lesvos the international recognition and appreciation it deserves,” as their “efforts to produce highest quality olive oils are consistently recognized by this prestigious competition.”

Ioannis Kampouris of Elawon, producer of Gold Award-winning Elawon Green Fresh, a medium intensity Athinolia, seemed to echo others in saying “these medals give us life” and make “us want to work harder.”

As Kampouris commented, many a Greeks claim the world’s best olive oil comes from their own village (or region or olive variety). In recent years, careful Greek producers like these NYIOOC winners have studied modern olive oil production methods and engaged in the serious, persistent efforts necessary for claims about being one of the best to have merit for more than one variety, village, and region in Greece. 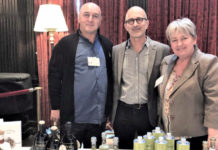